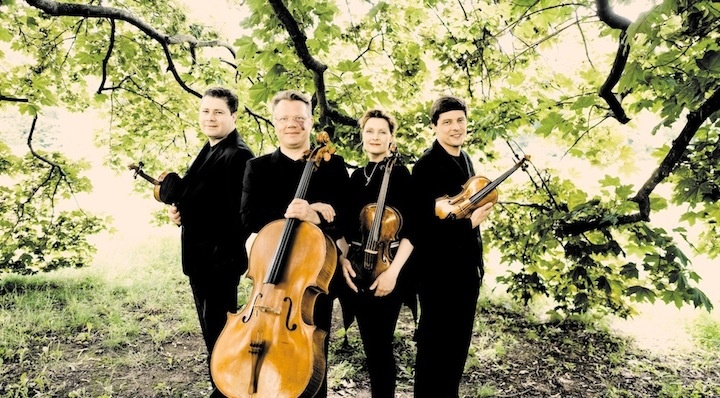 The Munich-based Henschel Quartet was founded in 1994, and in 2019 the ensemble marks it’s silver jubilee, 25 years of activity!
Its members are violinists, Christoph Henschel and Gregory Maytan, Monika Henschel, viola and Matthias Beyer-Karlshoj, ‘cello. Their first performance in Croatia, at 66th Dubrovnik Festival on July 26, 2015 resulted in the Croatian Radio and Television’s Orlando Prize for 2015, with the really impressive Music Jury Citation. Of its performances, SEEN & HEARD INTERNATIONAL has written: “If you ever get the opportunity to hear the Henschel Quartet in recital take it. String quartet playing rarely gets any better than this.”, while MUSICWEB-INTERNATIONAL.COM has said: ” …played with supreme confidence by players who savour every note.”… and THE NEW YORK TIMES described its performance in 2010 as ” …a thing of beauty… Warm hues and played with irresistible energy and high spirits.” Of its world-premiere recording of the Bruch STRING QUINTET IN E FLAT MAJOR with violist, Kazuki Sawa, awarded INTERNATIONAL MUSICWEB CD OF THE YEAR in 2009, the publication wrote: “…another remarkable achievement that should be snapped up immediately and …the Henschel Quartet…a towering performance, full of energy, mystery and beauty.” Of performances at CARNEGIE HALL during 2013, John Corigliano reviewing the concert wrote: “The magnificent Henschel Quartet plays as if they were one person. They are passionate, accurate and musically sophisticated. I was astounded at the quality of their performances.”

The year 1994 marked the foundation of the Henschel Quartett’s international career, when cellist Mathias Beyer-Karlshøj joined the founding members Christoph, Markus, and Monika Henschel, and the quartet devoted itself exclusively to chamber music.  In 1995 the quartet won multiple prizes at the international competitions of Evian, Banff, and Salzburg, and the following year won 1st prize and the gold medal at the Osaka International Chamber Music Competition.  Successful debuts in the world’s musical capitals, including an acclaimed BBC live broadcast standing in for the Juilliard Quartet, led their way to the forefront of international chamber music.  “This is, no question, one of the best groups in the world, a great string quartet.” (Los Angeles Times).

In February 2016 the quartet welcomed the celebrated violinist Catalin Desaga as a new member.

The quartet’s musical journey has included many remarkable highlights.  The Henschel Quartett played at the official re-opening of the Anna-Amalia Library in Weimar (a UNESCO World Heritage site), and travelled to Brussels as a Cultural Ambassador of the Federal Republic of Germany.  In March 2010 the quartet was privileged to perform at the Vatican in the presence of Pope Benedict XVI.  The quartet has regularly been invited to the Royal Palace of Madrid to perform on the four Stradivari of the royal collection.  In June 2012 the Henschel Quartett was invited, as the first European quartet in twenty years, to perform Beethoven’s complete string quartets in the prestigious Suntory Hall in Tokyo.  In the same year Monika Henschel became the president of the newly-formed Association of German String Quartets, and in 2013 Christoph Henschel was appointed Honorary Professor at the University of Augsburg.

Highlights of last season and the current one include appearances in London, Amsterdam, Munich, Yokohama and Tokyo (Geidai University).

The Henschel Quartett’s recordings have been awarded many prizes, including the Preis der Deutschen Schallplattenkritik and several CD of the Year Awards (IMW).  Their CDs have been recommended in such prominent titles as Gramophone Magazine, the Sunday Times, and the Süddeutsche Zeitung. Forthcoming is a CD of works by Christopher Theofanidis.

The Henschel Quartett regularly accepts invitations to teach at world-class institutions, from Yale University in the USA to the Royal Northern College of Music in England and the University of Melbourne in Australia.  The quartet is also engaged in an ongoing dialogue with the Bavarian Ministry of Culture in relation to youth music projects in the quartet’s home city of Munich.

Since 2006 the Henschel Quartett has been contributing as an Ambassador of SOS Children’s Villages.

The link to the film portrait  about the HENSCHEL QUARTET made in occasion of their 15-th anniversary:

Our Reviewers’ Choices for Best Musical Events of 2013
The Henschel Quartet at the RNCM Chamber Music Festival, Manchester in January gave a remarkable performance of Beethoven’s String Quartets Op. 59/1 ‘Razumovsky’ and Op. 132. I can’t imagine chamber music playing better than this from this world class Munich based quartet. http://seenandheard-international.com/2013/01/complete-beethoven-trios-and-quartets-off-to-a-great-start/
Michael Cookson, Seen and Heard International January 7 2014

Janacek . Schulhoff . Sibelius
The Henschel Quartet have always known their own minds and so it is hardly that they should have put together this exciting programme of, while not full-blown outcasts, composers who hang moodily around on the fringe of chamber music. The First String Quartet of Ervin Schulhoff is one of the group’s signature pieces; and whereas his music may be largely unperformed and recorded these days – despite his having been one of the brightest stars in Germany’s pre-war firmament – this piece (written in 1924, just as he headed into his most prolific period) is the least unknown of his works.Despite being tricky to listen to – it is an odd mixture of theremin-ghostly effects that wouldn’t be incongruous in the Ghostbusters soundtrack, and block playing that sounds like some sort of grotesque hoedown –the Henschel pull out its challenging phrases to just the right side of indulgent, disclosing what feels like a keen sense of altruism for the listener and an honest desire to expose the beauty of the music. That the Janáček isn’t abandoned enough for my taste, although its reverential (not a word often associated with the Henschel) care and attention to the micro-aspects of the phrasing certainly create a boundary that allows the composer’s unique creativity, is a slightly disappointingly surprising revelation on this disc. But the open heart that drives the Schulhoff, and even the Sibelius (which functions here more as an insight into the symphonies than a particularly interesting free-standing piece of chamber music), is more than enough to recommend it.
Gramophone January 2014 Caroline Gill

Interview – The Henschel Quartet´s short list of advice to young performers
1. During rehearsals step out from the group and listen to your colleagues from the audience´s position. It´s ideal for developing a critical ear
2. In fast movements, long notes should be filled with life. In slow movements, short notes should never be rushed.
3. You should always play as if your life depends on it.  If the performer is not 100 per cent focused on the dramatic flow of the music they´re playing, how can they hope to communicate it to the audience?
4. Musicians today need so many skills other than playing their instrument well – managing festivals, building relationships with fans, releasing their own recordings. But if you happen to have a vision, make it happen – don´t wait for someone else to do it for you.
The Strad October 2013 issue