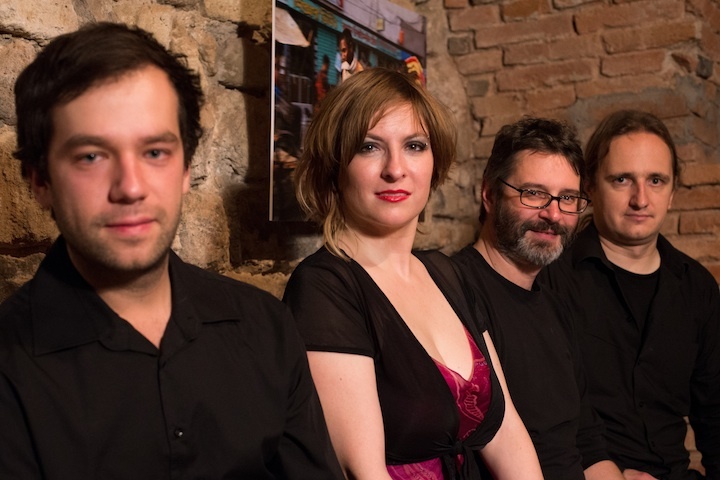 The storm of passion and the peace of the ocean, which rests somewhere amid the Iberian Peninsula, South America and their rich folklore, is the musical muse that connects Polona, Timi, Vojko and Mitja. Mascara explores the space inside and outside of the field of classical music; cautiously, respectfully, it colors over the line with a brush of tense strings and the warmth of human voice. Their first recently release CD “Mascara”, excellent response of the audiences and of music critics as well, impressive number of near 40 concerts which took place from the beginning of the year 2012 makes them become really desirable music guests. At the very beginning of their concerts – in concert halls, sacred venues, clubs or at open space performances either – some secret connection between listeners, the perfect harmony of three fantastic guitars and passionate Polona’s voice full of emotions has been established.

The storm of passion and the peace of the ocean, which rests somewhere amid the Iberian Peninsula, South America and their rich folklore, is the musical muse that connects Polona, Timi, Vojko and Mitja. Mascaraexplores the space inside and outside of the field of classical music; cautiously, respectfully, it colors over the line with a brush of tense strings and the warmth of human voice.

Their music expresses so powerfully, so directly and so concisely that poignant longing captured on the streets of Montevideo, Buenos Aires, Lisbon… halfway between bordellos and milongas… joy and a sad melancholy feeling…amongst merchants, sailors and African immigrants…it’s the music played at night when all kinds of masks are allowed (mascara – Spanish word for mask), the music which comes with moonshine and dies down at daybreak…

Musicians are brought together by a historical crossroads and it is here that they meet every night – those who are still around and those who have long since passed away…On a street corner there is still Mascara Cafe…If you get closer, you will hear the music of Mariza, Dino Saluzzi, Tom Waits, Astor Piazzolla and of many others… of those who have escaped salon parquet floors and cliches.

Polona Udovič (voice), Timi Krajnc (guitar), Vojko Vešligaj (guitar) and Mitja Režman (bass guitar)  are classically trained musicians, acclaimed at home and abroad. The Trio is a reflection of their valuable musical experiences and their deep understanding of music, their artistic careers and their intensive work with numerous artists, chamber groups, orchestras, ensembles, in concert halls and at festivals around the world.

Polona Udovič  began to learn violin at the music school Vič – Rudnik in Ljubljana by prof. I. Kalanj and continued her musical education at the Ljubljana Music and Ballet Secondary School by prof. A. Sešek. In the year of 2004 she graduaded  at Academy for Music with the highest grade in the class of prof. V. Meljnikov. After one year of employment in The Simphony Orchestra of RTV Slovenija she specialized as a teacher for violin beginners at the music school Grosuplje, where she works today. As a soloist and a member of various chamber groups she performed many important concerts in Slovenija and abroad. As a soloist she performed with The Orchestra of Opera and Ballet Ljubljana.

She attended the class of solo singing at music school Kranj by prof. S. Hajdarević, but she had to stop with the opera singing because of the problems with her voice. For the last ten years she takes an interest in singing of Argentinian tango. She performes with the groups, such as Cana flamenca, Funtango, Distango, Quatro por tango and Astorpia. She was a member of a group Moonlight Echo. She performed with The Symbolic Orchestra and as a member of Terrafolk Production. With the group Terrafolk she worked with the project Full Circle, when they went to France and The United States. She performed at the Jazz Festival Cerkno, Festival Okarina Bled, Festival Trnfest in Ljubljana, Festival Lent in Maribor, Mediteran Festival in Izola and at the tango festival in Idrija with the group Funtango, which was recorded by TV Slovenija as well. In February 2012 she performed as a soloist with The Guitar Orchestra of Ljudmil Rus.

She is employed at the Music school Grosuplje, where she teaches violin. She also conducts the Music school’s String orchestra and plays trombone in the wind orchestra of the School. She is a founder of a folk violin music group Gross upi. Her pupils won many prizes on different competitions.

Timi Krajnc is one of the more recognizable Slovenian guitarists of the younger generation. He is distinguished by the versatility of musical styles and also performs in various music formations. His music education started in Radlje ob Dravi with prof. Ivo Vrhovnik and Matej Švab, his early guitar mentors. In addition to the classical guitar he also played folk and jazz guitar right from the beginning. He continued his studies at the Conservatory in Maribor, with prof. Vojko Vešligaj, where he performed at many concerts as a soloist as well as in chamber music ensembles and achieved many awards at the international and national competitions. At present he studies at the Academy of Music in Ljubljana with prof. Tomaž Rajterič. Timi also plays with Big Band Radlje and with Big Band of Academy of Music Ljubljana. He is a member of the quintet Piazzollekyand of the Mascara Quartet.  He works regularly in many famous Slovenian groups. In addition to all his activities as a musician, he also works on PA loudspeaker systems. Together with his father Miro, he has developed an exceptional PA speaker system for the Mascara Quartet.

Born in Celje (1978), Vojko Vešligaj attended the music school in Rogaška Slatina and Šentjur. In Maribor he continued the secondary music school and developed his skills under prof. Istvan Römer. He also finished the secondary school in double bass in Maribor. Vojko Vešligaj continued his education at the Academy of Music in Ljubljana, the first year under prof. Andrej Grafenauer and then under prof. Tomaž Rajterič, where he also graduated with honours in the year 2002. In 2003 he also finished his postgraduate studies under the same professor.

Vojko Vešligaj is the winner of prizes at international ad national competitions in Italy, Serbia and Montenegro and Slovenia. He recorded for the RTV-Slovenia archive.
He won the Prešeren award of the Academy of Music in Ljubljana for special achievements.
He is currently teaching guitar at the Conservatory for Music and Ballet in Maribor.

Mitja Režman  first learned playing the classical guitar in Zagreb under prof. Darko Pelužan and Ante Čagalj. Later he studied in Ljubljana at the Academy of music where he also graduated under prof. Tomaž Rajterič. He played together with the Maribor Opera orchestra, as well as the chamber orchestra of the Academy of music when they carried out a concert of young Slovenian composers. He performed at various concerts at home and abroad and performed at guitar festivals and festivals of chamber music (Concert stage of the youth Sežana, Music September Maribor, Autumn serenades, Dani gitare Zagreb, spring camp Uzmah Hvar, Music July at the coast in Koper, GM stage, Musica Danubiana Ljubljana, Madlenianum Belgrade, Castoria Greece …), most of the time as a member of the guitar quartet Amarcord, that is also the winner of the special award at the first competition Vladimir Lovec – Ivan Šček in Koper (2001), the second award at the competition Simone Salaso in Viareggiu in Italy in the year 2002, and the winner of the Prešeren award awarded by the Academy of music in Ljubljana. Mitja Režan studied the Roma folklore music and cooperated and recorded together with various groups (Romano Rai, Ira Roma …).

Many songs have been written or arranged for the guitar quartet or the guitar solo by him. Mitja Režman participated at master classes of the majority of the better known guitarists at different international festivals and is also an organizer of a classical guitar seminar, which is traditionally held annually at the Music school Krško, where he is also the leader of the guitar orchestra and the principal assistant. Mitja Režman also graduated at the Faculty of law and thus devotes a lot of time to the legal frameworks of music education and he has got a lot of experience with legal consulting for institutions and associations for education, culture and art. He gives lectures about the responsibility in the public space and the ethic viewpoints of teaching.

Record to Die for

Imagine Argentine tango, Portuguese fado, and Latin milonga, all wrapped in artful musical extrapolations—from Slovenia. Picture the tall, enchanting presence of Polona Udovic doing her best to channel the sorrowful spirit of renowned fadista Amália Rodrigues singing “Barco Negro.” Then imagine all this heartache, death, and dark soul captured in an exquisite all-analog recording made with no cuts or editing. The Mascara Quartet just turned on the tape and poured it all out. The sound and performances are fresh and warm, steeped in late-night contradanza. This disc satisfies on both the musical and sonic levels.

A. Piazzolla – Yo Soy Maria

H. Arlen – Over the Rainbow

H. Arlen – Over the Rainbow

A. Piazzolla – Yo Soy Maria