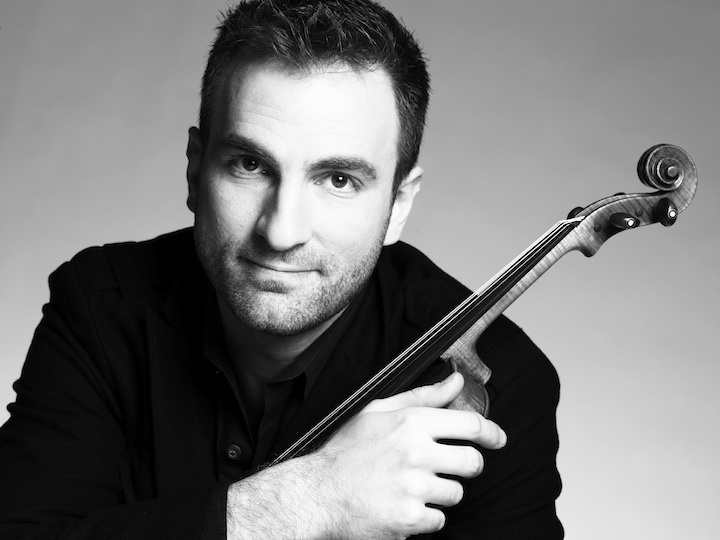 Stefan Milenkovich violinist, is recognized internationally for both exceptional artistry and his life-long commitment to humanitarianism.

Serbia’s Artist of the Century, Most Humane Person, and Brand Personality of the Year, violinist Stefan Milenkovich enjoys a prolific career as an internationally sought-after soloist and recitalist, with an extraordinary productive longevity, professionalism and creativity.

Deeply committed to international humanitarian causes, in 2002 Milenkovich received the Lifting Up the World With Oneness Heartaward for his humanitarian activities, handed to him personally by the guru Sri Chinmoy. He also participated in a number of gala concerts under the auspices of UNESCO in Paris with such artists as Placido Domingo, Lorin Maazel, Alexis Weissenberg, and Sir Yehudi Menuhin, and was active as the First Child Ambassador during the Balkan wars in early 90’.

As a musician of broad stylistic interests, Milenkovich performed with five-time Grammy Nominee rock band Gorillaz in one of the world’s most renowned venues – Apollo Theater in Harlem, New York City. The critically acclaimed performance was featured live on MTV. Recent collaborations include performances with Grammy Award Nominee lutist Edin Karamazov, as well as a musical partnership with guitarist Vlatko Stefanovski and his trio, where Milenkovich explored the realm of improvisation and acoustic-electric violin.

Please do not alter this biography without artist’s permission.

” Serbian-Italian virtuoso Stefan Milenkovich offered a stellar rendition of Sibelius’ warhorse.  Milenkovich brought icy stoicism to the opening of the Allegro moderato, and poignant ardor to the movement’s second theme. His commanding technique was on display throughout, especially in his idiosyncratically inflected cadenza and searing delivery of the coda. Milenkovich’s concentrated tone leant itself well to the emotional vehemence of the Adagio di molto, and his hooked bowing in the finale was snappy and buoyant. “

“Violinist Stefan Milenkovich’s recital at the Kennedy Center was so disarmingly magical that it is not easy to describe it’s glories. Milenkovich is clearly at the treshold of a major career. This is not so much a matter of a dazzling virtuosity ( though he has it all) as of searching musicianship.”

“Milenkovich has it all: the beauty of sound like David Oistrakh, the clearity and logic of the phrase like Henryk Szering, the virtuosity of Jasha Heifetz, the love for the music like Yehudy Menuhin and the humor and joy of Itzak Perlman.”

” Milenkovich is a star, and that’s something that comes along only a few times in a century. I may not know much, but I know magic when I hear it.”

“The 24-year-old Belgrade-born violinist Stefan Milenkovich has remarkable control over his instrument and is blessed with superb intonation and what seems like a limitless capacity for sustaining a big, broad, smooth line.”

” Milenkovich’s recital at the 92nd Street Y was impressive. He is a stunning virtuoso.”

” Milenkovich won me over as the most exciting talent the International Violin Competition of Indianapolis has ever brought to my attention.”

In a bit of luxury casting, the Serbian violin virtuoso Stefan Milenkovich joined string groups in a quintet by Louis Spohr and a quartet by Beethoven at the ensemble’s recent concert in Christ and St. Stephen’s Episcopal Church on the Upper West Side. Mr. Milenkovich provided strong leadership in both works, but the most delicious moment came in the third-movement Allegretto of Beethoven’s Quartet No.8, with its incorporation of a Russian theme. Mr. Milenkovich seemed to celebrate his Slavic origins with special relish in a delightful reading. JAMES R. OESTREICH

Concerto No. 2 in b minor “La Campanella”

Concerto for Violin and Cello, Op. 102

Concerto in A minor

Violin Concerto in A Minor RV356

Concerto for Two Violins in A Minor RV522

Concerto for 4 Violins in B minor RV 580

Romance for Violin and Orchestra No. 2 in F Major, Op. 50

Concerto in a minor op.82

Concerto for Violin and Orchestra in e minor, op. 64

Concerto for Violin and String Orchestra in d minor

Concerto for Violin and Orchestra No. 1 in a minor, Op. 77